As CoderDojo Japan, we and other CoderDojo’s organizers and mentors teamed up and exhibited CoderDojo activities at Maker Fair Tokyo 2015 (MFT2015) on Augst 1st and 2nd. MFT2015 is a two-day event of all kinds of “Makers” that include robotic and digital fabrication. During the event, we also had opportunities to hold workshops titled “Let’s try to create a Rube Goldberg machine together!”.

We had a workshop for kids to experience running Arduino and Raspberry Pi, both of which were controlled by Scratch.

On the first day of the event, we alll gathered together at the venue at 9:30 AM, then set up things for our exhibit booth in pararell with preparation for the first workshop session. The exhibition was scheduled to open at noon, and the workshop was scheduled to start at 12:30. Very tight time schedule to get everything readly!

CoderDojo Japan Flyers and Movie at Our Exhibit Booth

This movie shows how it works.

So many visitors at our booth throughout the exhibition. 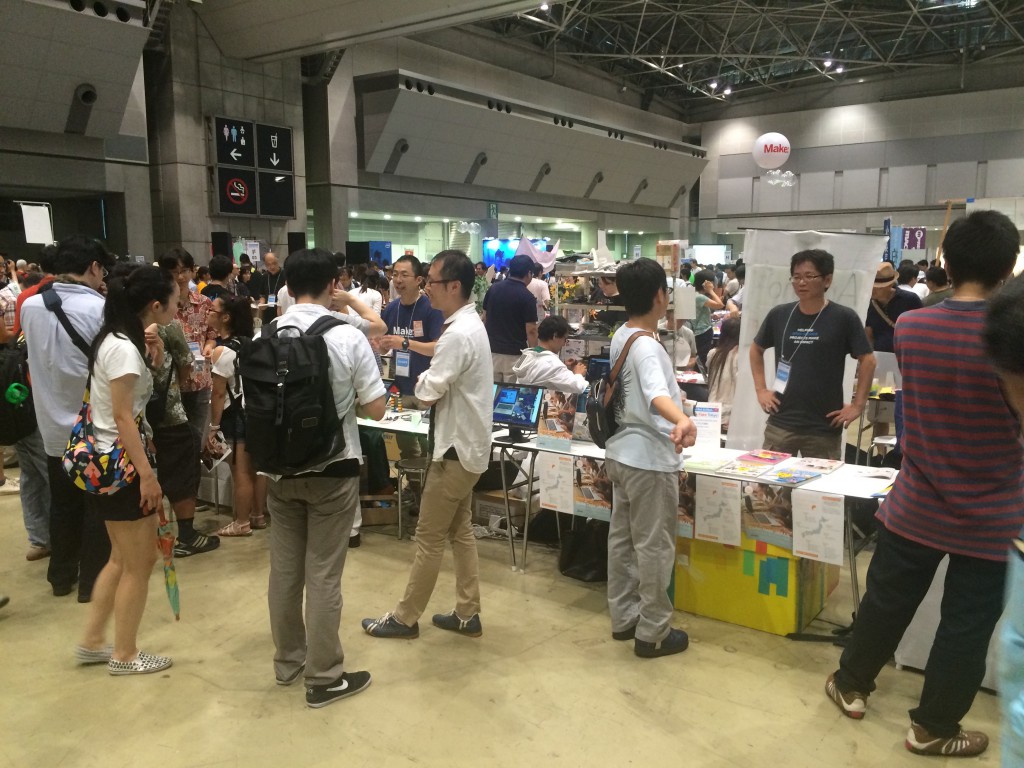 It was amazing we had always guests that kept us busy throughout the exhibition. They stopped by our booth and listened to our story. We explained details of CoderDojo activity. 500 flyers we prepared for the event were all gone.
Telling about the atmosphere of the event, to be honest, it seemed most kids came to MFT to see cool Robots, not coding. Although some kids showed their interests in the Rube Goldberg machine asking “How did you make this?”, those who looked interested in rhe Arduino-Scratch combination were mostly adults.

Hiroyuki from our Nishinomiya-Umeda Dojo had created “Scratino” , a Scratch’s extended function that adds blocks for controling Arduino. Scratino played an outstanding role both at our exhibit and workshops.
Here is how to use Scratino.

We were often asked by visitors whether there is any dojo in Yokohama area or the Tokyo midtown area. Hope new Dojos will start in these areas. 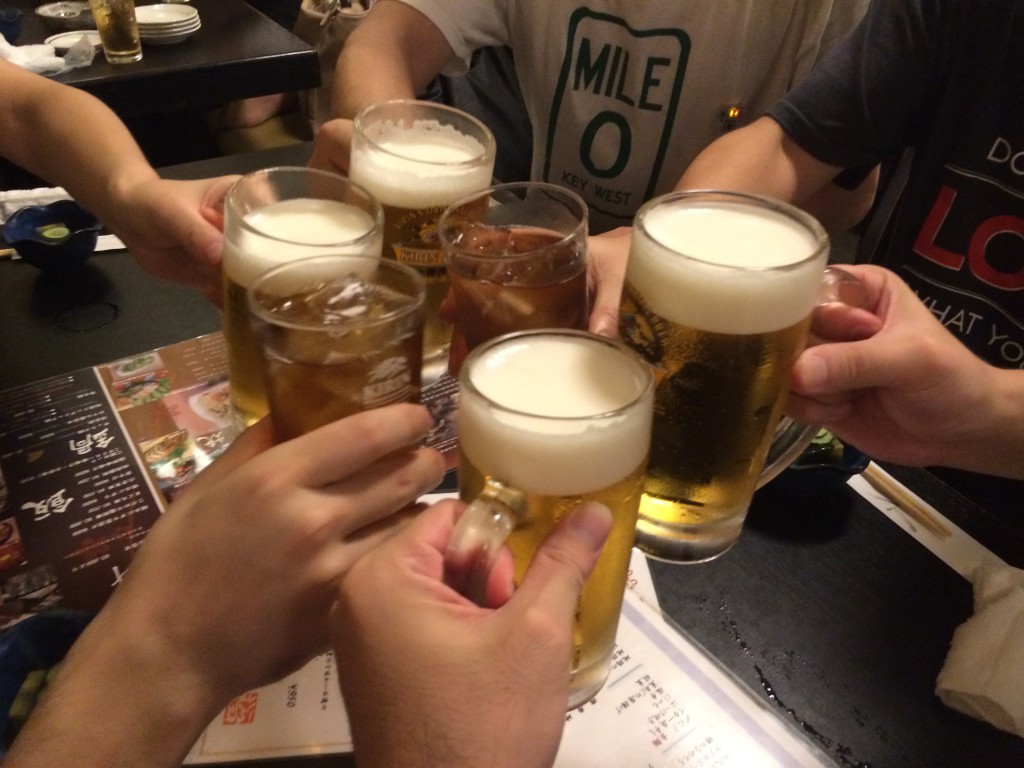 What to do next after a successful event? ….Party and ”Kanpai”(Cheers)!
We joined MKT2015 reception party on the first day. And we had a small party with CoderDojo Japan people on the second day at a Japanese-style pub. At both parties, we could exchange great conversation and discussion over CoderDojo because we all love CoderDojo. Some of the topics were: how each Dojo organizes, current circumstances of Japan’s dojos, and CoderDojo Japan’s future.

As our fun talks heated up, we talked about having annual CoderDojo Japan events that dojos all over Japan get together… We were like saying “we should have a Japan’s DojoCon”. I personally think it will be cool if we can have an event here in Japan to meet Japan’s and oversea CoderDojo people, including guests invited from Ireland and other countries.

When you hear about CoderDojo, what do you come up with your mind first? I think many of you imagine the words such as “education”, “technology”, or “coding”. However, my perspective is a bit different. I’m personally interested in CoderDojo because the volunteer-led movement is also a global movement. As a CoderDojo organizer, I want to learn how oversea dojos organize and have knowhow to teach kids.
So, this time’s collaborative event has paved the way to foster momentum of holding a DojoCon in Japan, and it was a big step forward for me.

I’d like to thank all who helped and supported this time’s event. First, I’d like to give my special thanks to those who helped our exhibit at MFT2015. They are: Hiroyuki who first said “Why don’t we exhibit our activities at Maker Fair Tokyo2015!?”; Yohei who welcomed and helped extensively to exhibit as CoderDojo Japan; Kenich, Ippei, and Takayuki,who traveled all the way to Tokyo from Kansai area to be mentors at our exhibit; Masao and Tokazono who camt to MFT2015 to help the event together. We all enjoyed the event feeling happy. All in all, it was such a great event.

I also would like to give my special thanks to the following CoderDojo supporters who donated us for the CoderDojo Japan’s exhibit and workshops. Thanks to their supports, our exhibit was very successful and we could spend the fruitful two days. The total amount was 63,000 JPY!! Thank you so much! 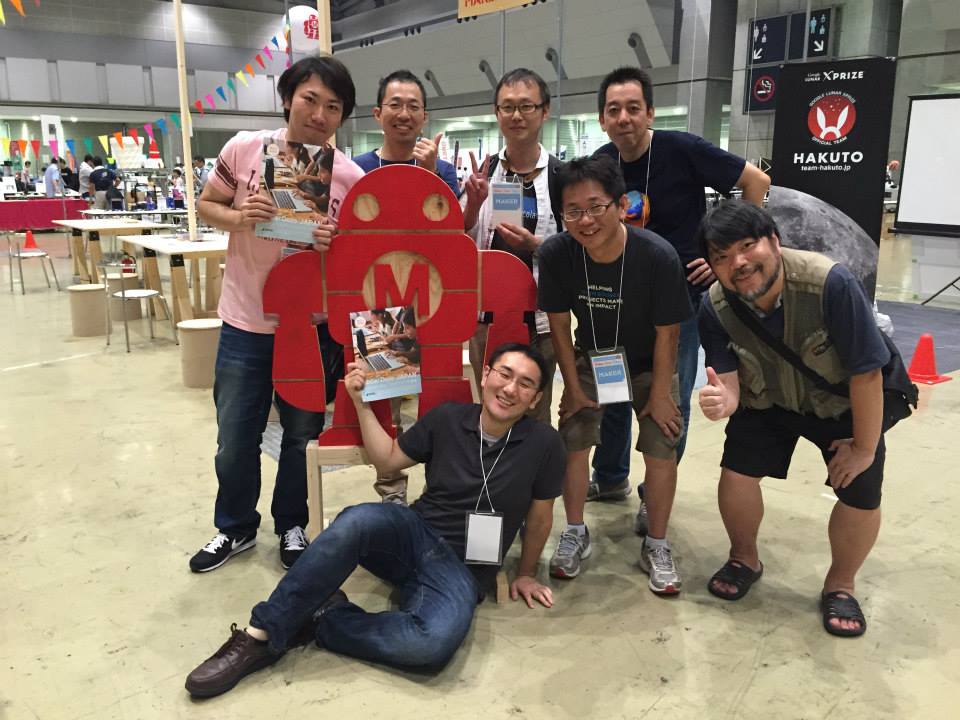 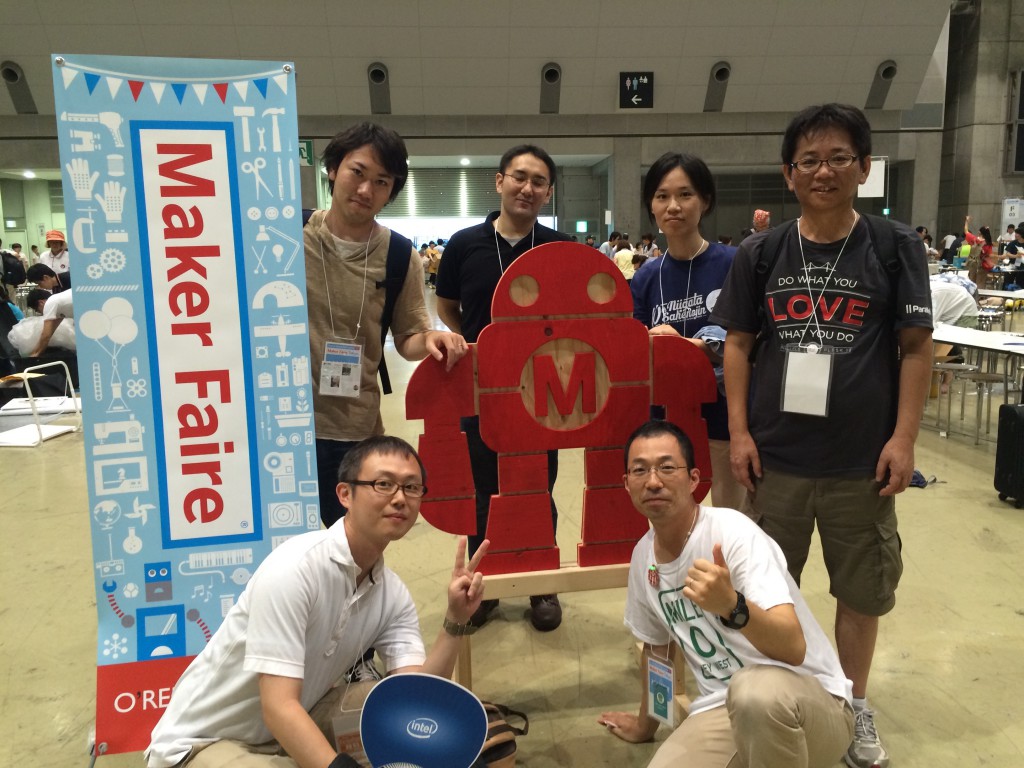